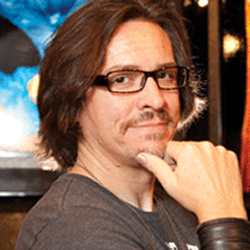 Born in Pennsylvania in 1964, Guyton had the groundwork set for his artistic career at the age of 6.

In 1984 he attended The Art Institute of Pittsburgh where he studied the fine arts, sculpture, and design theory. He graduated with an Associates Degree in Visual Communications. Since moving to Southern California in 1987, he has worked as a fine and commercial artist doing airbrush illustration, murals and signage.